Explain why free international trade can be good for countries’ economies, and examine the attempts to reduce trade barriers in the past decade.

Trade is a major engine of growth, both in developed and developing countries. Correspondingly, the opening of markets to allow for free trade internationally has been cited as a key factor boosting trade and economic growth globally over the years (OECD, 1999; 2003).

There are a number of theories that highlight the reasons why countries should engage in international trade, and which consequently enhance support for the argument for free trade. These include Adam Smith’s theory of absolute advantage, the theory of comparative advantage by David Ricardo, and other more recent theories (Mankiw, 2010). The theory of comparative advantage which is one of the most popular theories advocating free trade, posits that nations should specialise in the production of goods for which they have relative/comparative advantage, and exchange them for products from other countries with relative advantage in other products (Reuvid and Sherlock, 2011). Although this theory has some flaws, one of them being that it ignores limits in international demand that may exist for the specialised outputs of some countries (Reuvid and Sherlock, 2011), it nevertheless provides a strong argument for the promotion of free trade.

Beyond theoretical reasons, statistics lend further support to the benefits of engaging in international trade. Sachs and Warner (1995), in a study to determine whether nations open to trade are more prosperous, over a period from 1970 to 1989, reported that for developed countries, the rate of growth for open economies was 2.3% per year, and compared with 0.7% for closed economies. In developing countries, the gains were even higher, with a growth rate of 4.5% for open countries, as against 0.7% for closed countries.

The OECD (2003) highlights other potential benefits of removing barriers to trade. They state that removing all tariffs on merchandise trade, and reducing the costs of trade by 1% of global trade value will boost overall welfare globally by over $170 billion a year, and this could add the equivalent of up to 2% to the current GDP of some regions.

Other advantages of promoting free international trade through the removal of barriers are as follows: It gives customers greater choice by making available a wider variety of products, and also access to potentially cheaper and/or better quality goods. Removing price distortions encourages the use of resources in a way that maximises the advantages offered by a country’s strengths/resources. In developing countries, these improvements in resource allocation and increased revenue from exports contribute to the national income and increase the resources available for further investments in development. It also enhances a country’s productivity and wealth (Love and Lattimore, 2009; Reuvid and Sherlock, 2011; The Economist, 2013b). These benefits have led to considerable attempts to reduce trade barriers, some of which shall be discussed subsequently.

Attempt to reduce trade barriers in the past decade: Prior to the early 1840s, the case for protection seemed to be stronger than the case for free trade. This led to the frequent imposition of tariffs and other such protectionist policies (The Economist, 2013b). However, due to the benefits of free trade, the case for its promotion has become stronger over the years, and this has led to significant increases in trade volume. The OECD (1999) points out that the volume of global merchandise trade today has grown to a level sixteen times higher than it was in 1950, reflecting the reduction of import and export barriers. Some of such attempts to reduce trade barriers, particularly in the past decade, shall be examined below.

The Doha Round: This is the latest round of negotiations among members of the World Trade Organisation. It follows the Uruguay round, which led to some of the biggest reforms in the world’s trading system. The Doha Round is aimed at achieving significant reforms in the international trading system through the lowering of trade barriers and revising of trade rules (World Trade Organisation, n.d). However, The Economist (2013a) points out that the Doha round has been in stagnation since 2008, and further states that this has led the world’s wealthy economies to “go their own way”, with partnerships such as the Trans-Atlantic Trade and Investment Partnership and the Trans-Pacific Partnership. These shall be discussed below.

The Transatlantic Trade and Investment Partnership: This has been cited as “the biggest trade deal in the world” (European Commission, 2014), and is a trade and investment agreement between the EU and the US, currently under negotiation. The Economist (2013a) notes that output can be boosted by 3% potentially, by cutting non-tariff barriers between the two. It is designed to drive growth, create jobs, and could boost the global economy by over €300 billion (European Commission, 2014).

The Trans-Pacific Partnership: This involves free-trade negotiations among twelve countries, covering a wide variety of areas. According to Pilling and Donnan (2013), it is arguably the most important advancement in free trade in the last two decades. However, it has also been criticised as a large corporate power that will threaten food safety and national sovereignty.

The Shanghai free trade zone: This was approved in July, 2013 and is an experiment on free trade by the Chinese government, with the loosening of regulations on significant factors influencing free trade in a small area in Shanghai, China’s economic hub, for particular industrial sectors. The government aims to build a free-trade zone that will meet international standards for the “facilitation of trade and investment, currency convertibility, effective and convenient regulation as well as a standardised legal environment”, with lower tariffs on traded goods, as well as a number of other benefits (Rabinovitch, 2013a). It has been cited as a significant move for China in conforming to new global and economy and trade trends, and in reducing trade barriers (BBC, 2013). However, it has been criticised for excluding a “long list of sectors” (Rabinovitch, 2013b) and implementing a number of extensive controls.

What negative effects might free international trade have upon countries’ economies, and why might counties adopt protectionist policies?

Way of life – Imposing barriers on strategic resources or commodities in countries where such commodities have become a ‘way of life’ like cattle rearing for the Fulani tribe of Nigeria, would affect living standards, causing a shift in the economy of livelihood of these people. According to a 2013 article by Jonathan Soble in the financial times, As Japan seeks to take a seat on the board of the TPP free trade bloc, it would have to decide if the protection of commodities significant to Japanese agriculture and populace, such as: rice, sugar, wheat, beef and dairy, would not affect tariff barriers in its transaction with member states. “Ultimately, “protecting agriculture” could mean winning long phase-in periods for tariff reduction, combined with increasing direct government subsidies to ease the pain of competition. A similar approach was used when Japan negotiated to join the World Trade Organization in the 1990s.” (Soble, 2013, p. 2).

Balance of payments – Countries continue to fail in securing the benefits of trade for positive growth in its economy and its companies by securing access to market. A lot of pitfalls lie in the ability of these countries to gain access into the markets of one another effectively without the risk of being vulnerable to prevailing domestic/international competition. For instance the US fears that bringing Japan into the TPP could have a daunting effect on its balance of payments, they fear that they may not be able to gain proper access into the Asia-Pacific region without facing stiff domestic competition. Seeing that the US would need to address and impose protection on its state-owned assets such as intellectual property, scientific agriculture. The focus of reaching an agreement with Japan ahead of its TPP membership is to resolve trade disagreements in sectors such as automobiles, insurance policies, competition policy and sanitary ethics. (Politi, 2013, p. 4).

The graph below shows the balance needed to be met in trade agreements between the US and Japan and the export contribution japan has made to the Trans-Pacific trade bloc.

Dumping – Domestic producers are most affected by Dumping their products are being sold at a lower prices on export than domestically, hence the need for the government to enable protection for this group by discouraging imports as it threats their own local production and profits, halting unfair foreign competition. Dumping could essentially be classed as either sporadic; implemented irregularly, persistent; implemented as a standing policy or predatory. In 2013,China the largest producer of solar panels imposed tariffs banning countries like the US and S. Korea and also threating to impose some EU countries from Dumping Polycrystalline silicon into its markets, as it is damaging the profitability of Chinese polisilicon producers. The duties imposed on US solar-grade polysilicon companies range from approximately 53 to 57 per cent and approximately 2 to 49 percent imposed on South Korean. In the past, the US has also imposed anti-dumping and countervailing duties on Chinese solar panels (Hook, 2013).

Countries adopt Protectionism or protectionist policies to balance the differences in competitive advantage and safeguard its industries from dumping by its competitors due to leverages such a geographical location, demographics and the presence of natural resource deposits. For instance, Saudi Arabia adopts a protection policy for its strategic oil resource, while using it as a bargaining chip to invite cheap labor from countries like Pakistan (The Migration Information Source, 2004). Pakistan would be unable to enforce competition by using cheap labor as its competitive advantage, as its unsustainable domestic labor market will also need to be protected. Hence, it would be able to compete in global markets eradicating the need for large domestic markets. There are several mediums by which countries protect their economy and industries, the most commonly used are:

Looking at the table below as explained by Lowes, B. (2013), If the world price for a product is at £10 and a £5 tariff is added, the price of the commodity would go up, two effects would suffice, demand in the UK would fall as the price increases to £15 proving more expensive, the commodity would become more attractive to be produced by UK domestic firms. In essence, as domestic supply would increase, demand for imports decrease making consumers pay £5 more for the product.

Imposition of a Tariff 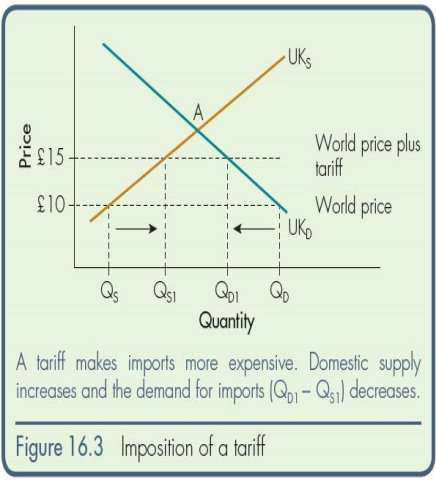 Quotas: In discouraging trade, Countries place embargos or sanctions, rather creating a limit to which the sector in focus is allowed certain leverage. This may include the amount of goods and services imported, to the number of visitors allowed into a country, to merely health visitors coming to recieve treatment in developed countries. The safety of its citizens and health concerns are just some of the numerous non-commercial reasons why countries enforce the quota barrier, increasing especially in countries like the US and UK with stricter shared controlling structures. In comparism, the act of enforcing qoutas for monetary purposes like concerns in balance-of-payment would by and large decay in emerging economic countries.

The Economist (2013b). Why did The Economist favour free trade. The Economist, 6 September, 2013 [Online]. Available at http://www.economist.com/blogs/freeexchange/2013/09/economic-history. Retrieved January, 2014.